But anglers know it as one of the top fisheries not only in Texas but in the United States.

With a bass fishery among the leading in the number of 13 pound plus or better bass caught in Texas and tournaments ranging from the Bassmaster Classic to the Toyota Texas Bass Classic held on its waters, Conroe is a bass angler’s dream.

The lake is also known for an impressive population of crappie and pursuing them is a top pursuit of local anglers who live along the lake.

Catfish however may be Conroe’s greatest gift to anglers. From catching limits of pan-sized channel cats in the summer to massive blues in winter, Conroe is a true catfish hotspot year-round.

There is something here for all freshwater anglers. Enjoy this fishing calendar and get out to fish Lake Conroe.

Live shad will be the bait of choice in deeper water but a Storm swim shad will work as long as you can control your retrieve to keep the bait in the depth where you have located the fish. The depths will vary from one day to the next. Today they may be in 20 foot of water and tomorrow they may be in 40 foot. It all depends on the schools of shad.

Catfish this time of year can be pretty big! Fish the main lake points between the creeks in anywhere from 10 to 20 feet of water for big blues and eating-size channel cats.

I normally bait an area using cattle cubes (AKA range cubes) and the 1 1/2 to 5-pound channels will show up and occasionally you'll have a big blue cat make the rounds. Anglers have been catching a lot catfish between 20 and 60 pounds! You can get them to bite on stink baits, chicken livers, bait shrimp or cut shad.

This is the time to catch trophy fish. Hybrids will be all around the lake on main lake points and humps. The use of electronics is a necessity! Find the schools of shad and you will find the hybrids. This time of year they will range in the water column from 28 foot to 40 feet. Simply, find the depth the bait are in and you will usually find the fish.

Live shad will be the bait of choice but the Storm swim shad will work if you can control the depth.

The hybrid stripers will begin to school on the surface in the morning and will be easy to catch on surface baits and swim shad swimbaits. They will be all around the lake on main lake points that have shallow sandy bottoms. Find the schools of shad and you will find the hybrids. This time of year they will run shad up on these points early and late in the day. During mid-day they will move deeper. Again, find the depth the bait is in and you will find the fish close by.

There are times when the fish will stay on the surface for the biggest part of the morning. This usually happens when it is overcast and calm. 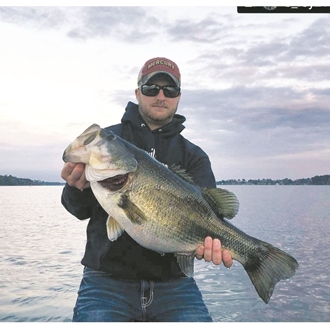 May: Crappie are Deep on Brush

The crappie are going to be close to deep water jumps with brush on them.The best way to catch them will be on minnows or crappie jigs.

When crappie jig fishing, the color doesn't matter so long as there's some chartreuse color in it somewhere.

Control your depth and keep your bait just above the brush, not so much in it, and you will do good!

Now we are in the time of the year where the crappie will be finished spawning and move out to the brush piles this time of year. Focus on brush in 12 to 14 foot of water early in the mornings and as the day wears on move out to the 16 to 20 foot brush piles.

Use minnows rigged up on a slip bobber with a bobber stop tied to the line so you can adjust the depth so the minnow swims just above the brush. This method has proven itself over several year and helps you avoid snagging in the brush.

When using a jig, always know the shallowest point of brush and use the countdown method: (1001,1002 and so on). This keeps the bait where you want it without hanging up. The kicker to the whole thing is if you get distracted you will probably hang it up. For jig fishing, using a 6-8 pound line is preferred so there is not much room for error. 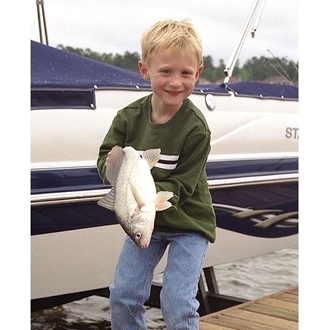 Locate stumps lining the river channel edge and tie off in 20 to 25 foot of water. Use a bag of cattle cubes to bring the fish to you. Dump half of a bag of cubes on two different locations and come back to the first.

Then, tie up and get your boat back in the same position. Using a spinning reel with a treble hook, an 1/8 ounce egg sinker and a piece of cut sponge wrapped around it; dip it in the bait and drop it to the bottom. Stay in contact with the bottom raising the bait up and down slowly until you feel some resistance. Then set the hook! On most days you can catch limits of fish in just a few hours.

With the first cold fronts of the year beginning to move in, the bass will begin to feed on shad in preparation for the cold weather when they will begin to selectively feed. This is good for fishermen who love aggressive strikes that a spinnerbait can bring.

If you’re on the water this time of year immediately after a cold front (up to the 3rd day after) and it is at daylight or an overcast day, locate the rip rap rock around the lake and start by throwing a small single blade spinner bait at the rocks then retrieving it back at a very fast rate where the bait is waking the surface. This is a very productive and very fast way to catch a number of fish that will attempt to pull the rod out of your hand.

The next thing to try would be a Pop'r or a Zara Spook or other top water lure. Work these baits in the same areas and alternate between the spinnerbait to determine which the bass want on that particular day.

Later in the day move out to offshore structures and throw crankbaits around them! 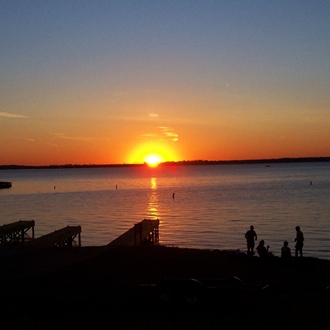 The bigger blue catfish will start biting pretty well with the water temperature coming down. The deeper ledges of the lake will hold some bigger fish this time of year.

Carolina rig a piece of cut bait along the ledge with a one ounce weight, a #8 treble hook and some stink bait. Start off around 12 feet deep and go to 30 feet for some unforgettable catfish action prospects!

The hybrid stripers will begin to school along ledges along the river channel. Again, this is a case of finding the schools of shad and you will find the hybrids nearby. This time of year they will run shad up on these ridges during the day they will move deeper around the area. Finding the depth of the bait is important to finding the fish.

Live shad will be the bait of choice in deeper water but the swim shad will work as long as you can control your retrieve to keep the bait in the depth the fish are going to be in. The depths will vary from one day to the next. Today they may be in 20 foot of water and tomorrow they may be in 40 foot. It all depends on the schools of shad and where they are balling up.

Conveniently located near the Houston Metropolitan area and just outside the beautiful city of Conroe, this lake is a keeper for anglers serious about their fishing.